The Real Truth Behind Iodine & Your Health By Herbalist Wendy Wilson

The Real Truth Behind Iodine & Your Health By Herbalist Wendy Wilson 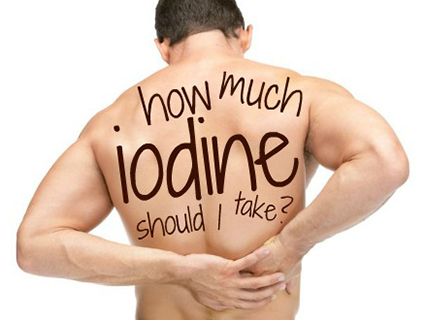 We’ve been hearing a lot about iodine protecting the thyroid especially with the Fukushima nuclear disaster and the continued fallout to the surrounding areas. The human thyroid is important for efficient metabolism function.

Iodine is in every organ and all of our tissues. Studies suggest that iodine helps the body fight off diseases such as cancer. Even without nuclear disasters, what could be causing low levels of iodine in humans? Can taking iodine supplements help or hurt? Let’s see how we should approach the iodine issue.

So, which is it? Are we at risk of disease because of a lack of iodine or are we splitting hairs on this issue?

The CDC says that they estimate that 2.2 million American women are iodine deficient. A more realistic figure is about 11% to 15% of Americans are deficient in iodine.

Currently doctors can check iodine levels with a urine sample. According to Dr. Mercola if the sample has iodine levels below 50 it indicates moderate to severe iodine deficiency. We’re told that current iodine levels have been steadily decreasing over the last 65 years. What is causing it? It is suggested that some of the foods we eat are contributing to the iodine loss such as foods containing bromine.

You find bromine in convenient baked goods, medications, soda inside plastic containers and pesticides. Bromine can also be found in some personal care products so read the labels. According to research the bromine displaces iodine and increases our risk to serious disease such as cancer.

Some experts contribute breast, thyroid, ovary and prostate cancer to bromine. The other problem is the foods we eat are much lower in iodine than 100 years ago. The demineralization of soil, fluoridated water and other contaminants have driven down the iodine levels. Before Fukushima occurred the Japanese were able to consume nearly 90% more natural iodine through their sea vegetables and fish.

There is a risk of getting to much iodine when we overdo the iodine supplements. We are aware that if the thyroid does not make enough of its hormones from iodine that we can develop hypothyroidism.

If we overdo the iodine supplements we could develop what has been called a subclinical and milder version of hypothyroidism. The symptoms would be the same; fatigue, weight gain and increased risk of heart disease. A 2012 study published in the American Journal of Clinical Nutrition stated that although the average American is low in iodine that, taking too much of an iodine supplement can also create problems.

Taking just 400 micrograms a day in iodine supplements can, according to the research, create a risk of developing the subclinical version of hypothyroidism.

YOUR THYROID ON SUPPLEMENTS

What happens to the thyroid when you take an iodine supplement? The thyroid does not use iodine directly and has to metabolize the iodine and convert it to iodine l and l2 in which the thyroid will use as thyroglobulin. This metabolizing process splits the iodine ions, which can cause oxidative stress. So, it is better to get the natural iodine in your food sources and leave the supplements for situations of nuclear fallout.

In the case of a nuclear emergency, the iodine supplement will flood the body with iodine protecting the thyroid from the radioactive iodine. If you take the widely distributed potassium iodide tablets when there is no emergency, this can put you at risk of thyrotoxicosis (too many thyroid hormones) and you can develop Graves’ disease (autoimmune disorder).

If you don’t feel like seeing your doctor for a urine analysis to check your iodine levels you can try doing a simple skin test. Your doctors would have you buy their skin test called SSKI (super-saturated potassium iodine) test. However, you can take a potent source of natural iodine, which would also have high concentrations of iodine and potassium, and test it on your skin. For instance, I would use a tincture of black walnut because it is high in natural iodine and potassium. Take a few drops and put it on your skin (inside of your arm is a good place).

Spread it into a patch-size and let it dry. If you see a yellowish stain appear or when you touch something wet with your fingers they can develop a yellowish stain on them, which means you have adequate iodine in your system. If the patch of iodine you put on your skin seems to disappear within a few hours it could indicate you need more iodine.

The longer it takes for the patch to disappear on your skin the more iodine you have in your system. So, if your patch is still evident after 4-6 hours, it is a safe bet you have adequate iodine. However, according to Dr. David Brownstein the absorption rates can be influenced by atmospheric temperatures and pressure influence by altitudes. He states that if you live in Denver, Colorado (5,000 feet above sea level) compared to Los Angeles, California (at sea level) the iodine will disappear much faster. Of course any test has a margin of error and you may wish to check with your physician on your test results before you diagnose yourself.

You would think that people are getting plenty of iodine by consuming salt because isn’t salt iodized? According to Dr. Marcelle Pick, there is no standard requirement to iodize processed salt; it is voluntary in the US and only one-fifth of the salt products are iodized. Dr. Pick’s research says that over the last forty years the amount of iodine we are getting in our diet is 50% less.

This has lead to an increase of iodine supplements in the marketplace and people are overdoing on the supplements and getting too much iodine too quickly and some are developing iodine-induced hypothyroidism. Iodine from natural food sources is a safer alternative.

If you are looking to salt for natural iodine make sure you avoid the processed salts and get a sun-dried unprocessed salt called Celtic Sea salt. Make sure your natural salt is not stark white and has a gray look to it. Salt that has been artificially processed is stripped of its natural minerals, including iodine, and is turned white. The sun-dried salt is a cardio-friendly salt and won’t promote hypertension. Celtic Sea salt from France is a top quality salt.

If you intend to get natural iodine from seaweed make sure you are using a source not affected by the radiation from Fukushima. Seaweed from the Atlantic would be a safer source.

If you are looking for the highest concentration of natural iodine you will find it in black walnut and it also has significant natural potassium. A little goes a long way with your natural sources of iodine and you would not have to take it every day especially if you are also using Celtic Sea salt. I would select a black walnut tincture due to the potency and longer shelf life.

WHERE I GET MY IODINE

I typically use Celtic Sea salt daily and some seaweed. I will use Black walnut with my organ cleanses at least twice annually. Black walnut is also good for removing any parasites too. You will find Celtic Sea salt (harvested in France), Black Walnut Tincture (can use to do skin test) and seaweed is in the Body Foundation Food Mix at Apothecary Herbs. You will also fine Dandelion Root Tincture if you have cancer concerns. Call Apothecary Herbs toll free 866-229-3663, International 704-885-0277 online http://www.thepowerherbs.com, where your healthcare options just became endless.

Disclaimer: The information presented is not intended to diagnosis, treat, prevent or cure disease. Seek medical advice from a licensed medical physician before using any product or therapy.

Previous Post Ep #244 – Black & White People Don’t Exist, Our Results From Our Root Canal Extractions, Eating Contest, Urine Therapy & Lots of Fun! – 5-2-2014 Next Post Are You At A Higher Risk of Disease Because You’re Missing This One Compound In Your Diet? by Herbalist Wendy Wilson