The Natural Hemorrhoid Cure That Worked For Me – Extreme Health Radio

The Natural Hemorrhoid Cure That Worked For Me 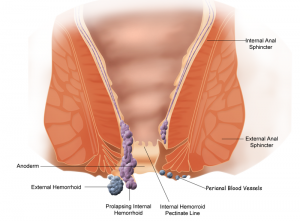 I’m guessing the majority of you aren’t dealing with hemorrhoids right now. But if you are, you have my sympathy. I always thought hemorrhoids (sometimes also called piles – I don’t know why because it’s such a strange sounding word), was something that older people got or people who ate crap diets.

I guess I was wrong. I’m neither old nor eat a crap diet. In fact my diet has been pretty stellar since 2003. Many of you know that from 2003 to 2010 I ate a 100% raw food vegan diet. I’m not sure if it was the healthiest but I know for a fact I wasn’t eating anything that could have somehow contributed to hemorrhoid growth.

I’d like to give you a little bit of a background about this problem I’ve had. Back in 2008 I tore my ACL doing Brazilian Jiu-Jitsu. It was pretty horrific to say the least. I fell to the ground and thought I was going to turn around to see my leg folded the opposite direction. Through a circuitous chain of events that I won’t bore you with, I had to get a colonoscopy before getting surgery for my torn ACL. It had something to do with blood in my stool they found years ago. I can’t even remember the entire situation.

During that colonoscopy I had to undergo in order to satisfy the insurance company, they found nothing but the actual report said they found some internal hemorrhoids. I didn’t even know that at the time.

I suspect they grew larger because of my horrible diet prior to 2003 and the fact that I sit 8+ hours a day at my job AND do a lot of heavy weight training. I think all of those combined became the reason I started having these problems with internal hemorrhoids.

The doctor said that just about everybody has hemorrhoids but most people don’t know it, or they don’t cause any discomfort in people.

The symptoms I was having were blood in my stool. It actually freaked me out. I thought I had colon cancer or rectal cancer. The fact that it hurt only when having a bowel movement meant that it probably was in fact hemorrhoids.

Also I had just had my blood tested as a result of all this and nothing came back irregular. So that was good. If I had had cancer, all the markers would have been off. White blood cell counts would have been through the roof among other things.

Anyway the pain was really really bad. So I did a bunch of online research and finally stumbled across an ebook called Hemorrhoid Miracle by Holly Hayden. On her website she talks about how she had hemorrhoids and gives all these testimonials that all seem too good to be true.

Even though I was really intrigued, I kept trying to take herbs like cayenne pepper and other things to help it heal. I even blended lots of fresh aloe leaves in my green smoothies to try to coat my digestive tract but nothing seemed to work. I ate raw eggs, chia seed pudding and nothing really made a difference.

Finally the pain got to a point where I just had to do something. I think I waited so long because I didn’t want to spend the money and I also figured I knew enough to fix the problem. But after buying the Hemorrhoid Miracle (also called H-Miracle) and reading it I quickly knew that there was a lot of very detailed and specific information about this issue that I didn’t know.

It’s really amazing how the internet works. You can find anything online nowadays. Even things like the squatty potty. 🙂

When I finally shelled out the cash for the book I was unsure about how “natural” the hemorrhoid remedies would be. But the good thing is that Holly Hayden is really as much of a freak about nutrition and natural cures for things as I am. I was pleasantly surprised.

So if you’ve got hemorrhoids (internal or external, protruding or not it doesn’t matter) and are at the end of your rope like I was. I would definitely say give a shot.

If you buy the book and try all the cures, and none of them work you can get your money back which is pretty reassuring to know. I think the site said you have 60 days to get a full refund on the product. It also comes with a bunch of cool bonuses that I haven’t even had a chance to read yet. I got what I wanted which was a natural cure.

In full disclosure if you purchase the Hemorrhoid Miracle through this link, you’ll be supporting our efforts here. I just want you to know that I’m not making any of this up in order to make a sale. That’s not my intention at all. Even if the product worked for me but promoted synthetic cures or chemicals I wouldn’t even waste your time by writing about it here.

I really think you should check it out. There is one main cure she recommends that she used to get rid of her hemorrhoids in 2 days and that’s the same remedy that worked for me. I used the main remedy twice per day, morning and evening for more than 2 days. I’m still on it actually and it’s been about a week.

I feel great though. There’s no more pain or blood while going to the bathroom.

So if you’re interested in finding a natural cure for hemorrhoids I’d definitely suggest you check it out. I would suggest getting the audio version as well as she talks about how to use her remedy in detail that really helps. For an extra few bucks I’d say it’s really worth it.

What’s cool is that in her book she gives TONS of other home made remedies and products that work but I didn’t even have to do any of them. I just tried the first one and it worked.

And by the way, not to take anything away from Holly and her work but if you search around online for the herbs she mentions you can get a better price than if you buy through the link she provides in the member section.

So don’t forget to shop around! But if you want to support Holly and her work then please buy through her link. I think in this economy it’s important to support people you know that are putting out good information so that they can continue to do so.

So if you’d like to checkout The Hemorrhoid Miracle you can learn more about it here.

Have you ever had hemorrhoids? If so, how did you get rid of them?