Thinking About Getting A Colonic Or Colon Hydrotherapy? Read This First! – Extreme Health Radio

Thinking About Getting A Colonic Or Colon Hydrotherapy? Read This First! 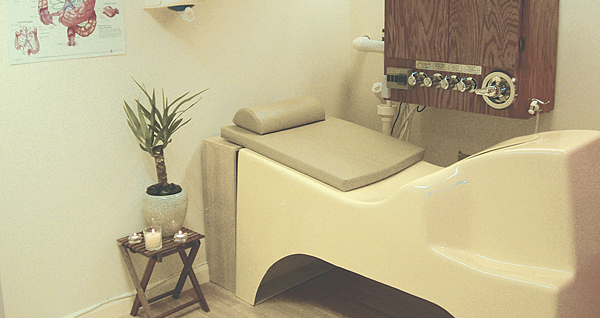 You’ve heard about enemas I’m sure. Now you’re about to learn from its big brother, the colonic. More polished individuals might call it “colon hydro therapy” or “colon irrigation”. Sounds much more clean and less messy right?

. I’ve been into raw and living foods since 2003 and always knew the value of them but never had the inclination to just go for it and get one done. Now I can say that I’ve finally experienced it first hand.

I’m no longer a colonic virgin. That doesn’t sound right does it? We’ll leave that one alone.

I’m hoping this article will help give you a little more motivation to get one done. Or if you’re feeling a bit spunky, a series of them.

For those that don’t know a colonic is different than a colonoscopy. A colonosocopy is a medical procedure where a surgeon inserts a CCD camera into the anus to see the colon walls. It also has the ability to do a biopsy or removal of polyps.

I’ve learned over the years that they can be very dangerous and that a hemoccult test is much more accurate and preferable. This test will detect microscopic traces of blood in stool samples. They’re even using new high tech cameras instead of traditional surgical methods.

That being said, a colonic is NOT anything close to a colonoscopy.

What Is A Colonic or Colon Hydroptherapy?

A colonic is when a small thin tube is inserten into the rectum (usually with coconut oil as the lubricant) and lukewarm water close to body temperature flows out and passes through the entire large intestine or colon.

After having 2 done I can say it’s not uncomfortable or painful at all. At least it wasn’t for me. But that all depends on whether or not your colon hydrotherapist is having a good day or not. 😉

In general yes it is safe. That all depends though. Drinking water is safe too, but not drinking 50 gallons at one time. Colon irrigation has been used for centuries by all cultures who understand the connection between gut health and longevity. Enemas were even mention in 1,500 B.C. in the Egymptian medical document called the Eber Papyrus. The Greeks also wrote about it in the Four Humours. For centuries the autointoxication hypothesis has held strong in the alternative health community.

Before the Lewis and Clark expedition, a prominent physician recommended people use enemas to stay healthy and to ward off any colds or the flu virus.

“In times past, knowledge of the bowel was more widespread and people were taught how to care for the bowel. Somehow, bowel wisdom got lost and it became something that no one wanted to talk about anymore.”— Bernard Jensen, D.C.

Today bowel health has been overlooked and replaced with ridiculous notions of using cough and cold medications or worse yet, chemotherapy and radiation to treat cancer. Instead of cleaning up the intestinal tract people would rather just pop a pill or take some drugs. Amazing. Only the body can heal and if you have a clogged up body, it can’t heal.

The next time you reach for that bottle of medication, just know that with each pill you swallow you’re damaging your liver and colon. Yes you may get rid of some symptoms but in the long run you’re damaging your organs. And trust me, you’ll need these bad boys later in life. Think of yourself as being a steward of your health and genetics. If you’re a good steward of your body, you can pass on these healthy genes to the next generation.

Upon walking into the building I was a little nervous. When we were greeted by the owner Debbie Drew she quickly put us at ease. She explained the whole procedure and acted as though it were no big deal. It reminded me of a doctor who has performed a thousand open heart surgeries. A little blood and guts never made a doctor squeamish did it? Same with a colon hydrotherapist. They’re used to this stuff.

After a few minutes of filling out paperwork she took us each to our individual rooms and had us undress only from the waist down and lay down on the table with a towel covering our private bits.

She then lubricated the tube and with a surgical glove on (and in mid conversation I might add) inserted the tube right in like it was nothin. I felt no pain or anything.

As you lie on the table you have complete control over the water flow as well as the temperature of the water.

Below the table you can see the viewing tube where you see small bits of fecal matter pass through. She’ll gently massage your colon by pressing on your stomach in certain key locations. This helps to dislodge any particles or gas that can be trapped in the colon.

The colon can take sharp turns and be twisted in strange angles so the massaging action really helps to release big chunks of fecal matter that normally would have never come out of your body.

Can you imagine bits of poop that could be from food you ate 20 years ago COULD STILL BE IN YOU?!! No wonder why people get colon cancer. We should take a long hard look at what we’re eating each day and make sure it’s clean.

What Do Colonics Help With?

Here’s just a small list conditions that regular colonics can help with.

What I Felt Afterward

After I was done Debbie had us use the restroom to clean up and expel any excess water or material that we felt were still in us. After a few minutes of using the toilet I felt quite a bit lighter. She gave us a probiotic supplement as well as a juice with super high levels of antioxidents in it.

When you have colonics many people suggest that the water actually depletes healthy intestinal flora in your digestive tract. So it’s critical to consume beneficial bacteria after a colonic. I had some sauerkraut, kefir and kombucha I had made at home to help with this.

I felt more clear, my brain fog was lifted and my stomach felt generally pretty great.

That only lasted for a few hours and then my stomach was worse that night. I think I had disrupted my gut flora by having that done. Then the next day I felt pretty much back to normal. When you disrupt colon homeostasis your stomach is bound to feel strange. There’s always going to be smoke when you demolish a building right?

Why You Should Get One

We now know that all disease and illness starts in the colon. Having a clean colon is absolutely essential for disease free living as well as longevity. But it doesn’t stop there. Living longer and without disease isn’t going to motivate people. Even though it should. Try this one on for size. It’ll clear your skin, help you to lose weight and give you more energy.

Trying to convince people to get something like this done by using the carrot stick of long life and being disease free just doesn’t work. People want quick fixes and results now. That’s unfortunate but it’s true. If you have bad skin like eczema or psoriasis or if you struggle with being overweight and bloated, you need to look further into setting up a yearly cleansing cycle to help release toxins from your body.

On top of having more energy, clear skin and losing weight, you’ll also live longer and ward of disease if you get cleaned out on a regular basis.

If you’re interested in the place where I got mine done, it was at La Paz Spa. You can see their youtube channel here.

Are you going to get one? If so, when? Let me know about it below!

The Jing Slingers – How To Add Superfoods & Super Herbs Into Your Foods For Optimum Health & Much More!