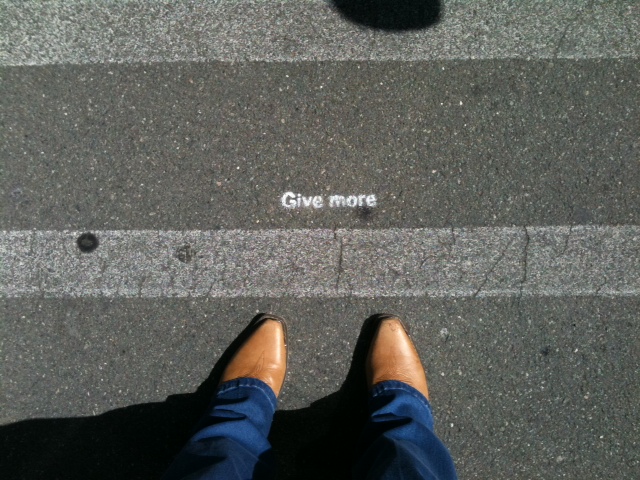 I’d like to think that some very small happenings or seemingly insignificant incidences that happen to us throughout our days actually have the ability to impact us in ways that can last for days, months or even years to come if we’d only let them. I mean, we probably can all recall a memory of something that went unnoticed by many other people, but to us it just struck a chord-stuck out in a way that left a lasting imprint in our minds.

I recall a cloudy, overcast and dreary day two winters ago when I was driving along a park on my way to work and there was a yellow school bus pulled over to the side of the park, where the bus driver (who was clearly on his break after what was probably the chaotic drop off of kids from home to school earlier that morning) who was standing alone on the grass about thirty feet from his bus, playing his bagpipe to his heart’s content.

It made me slow down. I paid attention.

I rolled down the car windows and as I slowly passed by, the chilling soul-moving sound of “Amazing Grace” filled the air, the park, and the space in my heart that was so open to receiving this beautiful and unexpected gift. There was nobody else around.

It was a gift for the man, who you could probably bet on that this was his passion and was thrilled to have the opportunity to bagpipe as loud as he wanted on his much deserved break. It was a gift for me, who decided to slow down enough to not miss the beauty of that moment. Since then, I have tried to be more aware of these possible everyday moments, and not let them pass me by.

So, my new project has begun. The goal is to spread a little daily love and joy as well as to give people that come across my project something to ponder as they go about their own lives, and maybe spark some new creative idea in them at how to possibly give back to the world.

One phrase a day. Stenciled in chalk, somewhere around town, or whatever town I happen to be in at the time when the inspiration for the phrase hits.

Whatever happens to be rolling around in my head, going on in my life, or just reveals itself to me-this is what is going to be written on some sidewalk or asphalt daily for these next thirty days. Whether viewed by many, only me, or just a few- the goal is to inspire and encourage.

I can’t take credit for the idea, as it was something that I stumbled across upon leaving the health food store with Justin a few weeks back. I was getting into my side of the car as Justin was loading the groceries and something caught my eye-it was the phrase ‘give more’-in white paint, and it was centered between lines that mark the parking spaces.

It made me feel like there are still people out there who are trying to make this world a better place to be. It had me asking myself the rest of the night, ” How do I give? How can I give more? How have people given to me over the years that has impacted me? Is there such a thing as giving too much? Too little?”…

That little phrase has kept me thinking. The fact that someone took the time out of their hectic life in Orange County, to ask people to reflect is (in my opinion) a super cool thing. Grated, graffiti is probably not the best way to spread some creative and inspiring love, however impactful it was to come across. My idea was to switch to chalk, seeing as it’s the legal, better thing to do.

I am excited to see what happens.

I will probably only be able to gauge this by what I personally get from it, but here’s to hoping that whoever else might come in contact with it in the next month is reminded to slow down, take a deep breath, and ponder their own life.

Hey everybody my name is Kate and I am a newcomer to the blogging world! I’ve always been a person who values fitness and health in my life but I can honestly say that the past few years have really been a wake-up call for something bigger-something better.

I am excited to blog about my journeys alongside my husband Justin as we discover and delve into the world of possibility that awaits us both in this new year and in the years to come!

We hope the shows from Extreme Health Radio both encourage and inspire you toward living a better, fuller and healthier life as well. We are honored to be able to produce them and get to do what we are passionate about on a day to day basis and I welcome any comments. Thanks and God bless.