Why You Should Love Your Parasites, Tumors & Rope Worms – Extreme Health Radio 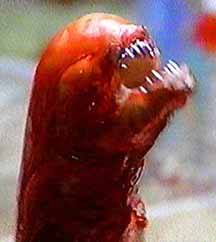 The first thing I do when I see an article is read the headline and then I look at the associated picture at the top of the page. I can only imagine the look on your face after you read the title of this article and then looked at that horrid picture to the left.

Today Kate and I just got done with our live show with Professor Alex Volinsky who’s been doing a lot of his own research and experimentation with rope worms.

During the show we discussed (albeit briefly – which was unfortunate) our attitude towards these things using our bodies as a nice warm host. Most people think dogs and cats get parasites, not humans. I mean that’s so 18th century right? How could humans have parasites? Well all you have to do is a google search for parasites in humans and you’ll quickly find out.

Or you could just listen to the show we did.

During that show we were struggling to figure out where these things come from and what they’re doing in our bodies. We don’t even know from a DNA level, what they even are yet.

But what we do know is once these things get expelled (want to see pictures from Kate’s latest adventure? click here to check that out) we suddenly feel better. We have more energy, we lose weight, we’re less bloated, our digestion radically improves, we sleep better and on it goes.

Personally I don’t know if like candida, parasites are a necessary thing to have or not. The problem is we have an overload of them. I suspect the amount of parasites is the real issue. You see all these people are going around trying to kill yeast infections and candida not realizing we need these in our bodies for many reasons. The main reason we need a small amount (notice I said small amount) of candida is to eat up dead cells.

What would happen if a few billion cells died off and there was no candida around to gobble up those dead cells?

But if you kill off just the excess candida in a very intelligent way, you’ll notice you start to regain control of your life again. I believe the same goes with these rope worms and parasites. We might need some of them but we most likely have too many of them in our bodies and they’re causing all kinds of health problems.

So Why Should We Love Parasites? 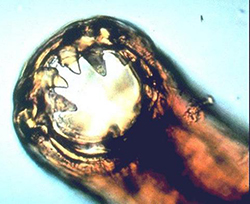 Whenever you wage war on something what do you get in response? You get a spirited battle on your hands. Nothing wants to die, even if its candida or pin worms. Everything wants to live. Somehow we believe that these things are “bad”.

Everything we see in the external world is simply a reflection of that which is going on in the heart of man.

So what do you think happens when we see parasites and label them as bad? We break the symbiotic energetic bond happening between it and our bodies. That’s the first step.

Then we tell ourselves they are the reason (even if scientifically we can’t prove it) we don’t feel well. After we’re done putting that label on them there’s only one thing left to do. Fight and kill.

Can there ever be peace within, when you’re involved in fighting and killing? I don’t care what it is. Is it possible to have peace when you’re mentally involved in such thought patterns?

Should we lie down passively and supposedly let these things eat us alive? That’s too extreme the other way as well. You see, this same principle applies to cancer patients as well. Ask yourself, how well has Nixon’s War on Cancer been going that started in 1971?

I’ll go out on a limb and say it’s been a huge disaster. You don’t come to peace while waging war.

So if you don’t go after it and kill it and you don’t roll over passively and let it overtake your body what do you do? I suggest there’s a middle path. It’s a combo path.

Could you not emotionally and spiritually give thanks for the parasite or cancerous tumor and holistically do natural cleansing protocols that assists them out of the body? Is it possible to love something and give thanks for it while at the same time allowing it to move on to bigger and better things….like your toilet?

The Native American Indians would give thanks for whatever animal they killed and actually have ceremonies that would last for days giving thanks to God for their sustinance. There’s a beautiful video of that here.

You see IBS, Crohn’s disease or colitis and even cancers are all teachers. The parasites and/or rope worms are the conduits to teach you something. It’s up to you to learn that lesson and figure out what it is you’re supposed to learn from them.

Don’t “fight” anything. Don’t fight a cold, don’t fight cancer, don’t fight and kill parasites. Thank them and then assist them to leave your body and I think you’ll find that you start to apply this principle to other areas of your life as well.

Everything and every one is a teacher to help you remember something you forgot somewhere along the way.

Now scroll back up to the top of this page, take a good look at that beautiful little parasite and thank him for teaching a lesson you need to learn.

Tell me about your experiences with parasites I’d love to know!

Comment below or continue the discussion in our forum! 🙂

The Jing Slingers – How To Add Superfoods & Super Herbs Into Your Foods For Optimum Health & Much More!