Why Smoothies Are Unhealthy

Is a smoothie a day even healthy for you? Is it natural for the human body to blend up so many ingredients and drink them down in a shake or smoothie?

It’s interesting how life works. I’ve been thinking a lot lately about smoothies and their supposed benefits. About a week ago I stumbled across this article by Kevin Trudeau. If you’d like you can read it here.

That being said, there’s an idea going around that if something isn’t “natural” it’s not healthy. As if the two are mutually exclusive. Our diets and lifestyles have strayed so far beyond anything natural that sometimes if we take advantage of something that isn’t natural, it can help us to heal and regain our health.

In his post Kevin talks about how you don’t need to drink smoothies to be healthy and I totally agree with him. You don’t. But they can help.

His arguement that nature never intended us to drink these protein shakes and smoothies all blended up like that does have some merit. I will give him that.

But just because our ancestors didn’t drink them doesn’t mean I shouldn’t. That’s a bad arguement. He says that it trains your body to not digest well because the molecules of the food fibers are so small that our bodies somehow don’t assimilate them. If our bodies can’t digest that, then it certainly wouldn’t digest a poorly masticated chunk of kale either.

It’s not the smoothie that’s the problem, it’s that our digestion isn’t up to par to begin with. 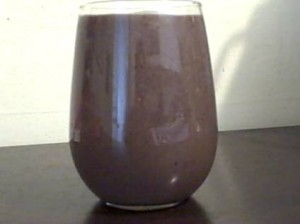 I digest them and I’m sure so do the millions of people who drink green smoothies or superfood smoothies. There’s a great book called Green for Life

that you may want to read that discusses this very topic of digestion.

He also doesn’t talk bout what’s being put in these unhealhty smoothies. Obviously some are going to be healthier than others.

His argument that the fiber doesn’t get digested because they can be drank too fast is a valid one. But the easy way to solve that is to chew your smoothie so that the digestive enzymes secreted by the glands in your mouth can start predigesting the food before it enters your stomach.

Drink them slowly and digestion is perfect.

Eat What Your Ancestors Ate

It just bothers me when people say things like “well our ancestors didn’t do (or eat) XYZ”. Sure something might not be totally natural but if doing something “unnatural” will help us rebuild parts of ourselves to help heal, how can that be unhealthy for us?

Many people will talk about our ancestral diet. To me that doesn’t make much sense. Imagine for a second that we as humans were designed to eat meat. Meat was what we were genetically designed to eat. Then imagine for thousands of years we strayed away from that and ate only plants. Then what should we eat? Should we be carnivores or herbavores?

Just because our ancestors ate the wrong thing, doesn’t mean I should.

What if our ancestors were wrong? Or what if they didn’t have access to the types of foods we were dedigned to eat wether they be meats, fruits, life foods or whatever else. I love the Weston A. Price foundation (and the ground breaking book, Nutrition and Physical Degeneration

) and follow a lot of what they say, but let’s face it, the people Weston Price studied didn’t have access to super herbs or even nutrients like pine pollen, deer antler or reishi mushroom.

100,000 years from now scientists can look back and ask the people then what their ancestors ate and they could say that people should start eating GMO corn, fast food hamburgers and candy like skittles or snicker bars.

It just doesn’t make sense. Just because our ancestors ate something doesn’t mean we should (to a limited degree). Eskimos do better at eating meats and Polynesian people can handle more fruits etc. But in general we should be asking ourselves what were we designed to eat?

In my mind the ancestor argument simply allows for limited rages of adaptation and adulteration of what humans were originally intended to eat.

Here’s a list of “unnatural” things that (in my opinion) are beneficial:

The point is that we do many things in our lives these days that are perhaps not natural. Who of us is living a really natural life? If God intended for us to be living like we did in the garden of eden, are we living that way?

Just because something isn’t natural doesn’t mean it’s not healthy or helpful. But don’t throw the baby out with the bathwater because there are better ways of doing things that are unnatural.

For example, bench pressing 400 pounds is just not a normal human movement. But that doesn’t mean it’s bad for you (unless you don’t have the correct form). There is a better way and that would be to do a push up or even use more circular body movements like using a club bell that mimmicks natural body movements.

Sure our ancestors didn’t have blenders or juicers. The argument that people never used to do these things is a bunch of poppycock. They also ate white bread and pasta, should I eat that too? They also worked all day in a factory, should I do that also?

The way I look at it is, yes, try to be as natural as possible (whatever that means) but take advantage of the technolgies we have today.

The jury is still out on this one. In Kevin’s article I didn’t see any science behind his claims (I’m obviously not providing any either) but the idea of blending foods causing us to have worse digestion is difficult to pinpoint. There are just so many factors like, what time of day is it being drunk, what stress levels is that person going through, what other diet and lifestyle choices are they making?

For me, my digestion and elimination has never been better since drinking smoothies.

Previous Post Our Business Model – Create Value By Helping People Next Post My Show Vision – To Help, Heal & Inspire You To Feel Great