There Is No Such Thing As Breakfast Food – Extreme Health Radio

There Is No Such Thing As Breakfast Food 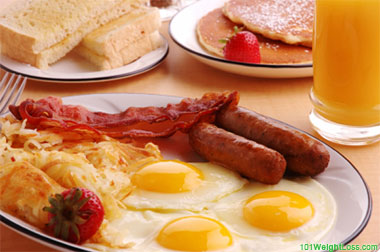 It’s so interesting how conditioned we’ve been in our daily lives. I’m still doing my best to be aware of all the things in my life where I’ve been conditioned. It could be simple little things.

“Is this opinion I’m having right now my own original opinion that I came up with or was it given to me by somebody I looked up to many years ago?”

If you think about a lot of your knee jerk reactions to things you might find that many of your ideas about things aren’t really your ideas to begin with. They were told to you by someone you looked up to or admired during a time in your life when you were young and impressionable.

For me I’m simply trying to be aware of this in my life more and more so I can separate my own thoughts from those that were given to me by people I looked up to as a child or worse yet, that I downloaded from television.

Have you ever wondered why we thing we need to eat 3 meals a day or we need to eat from the 4 basic food groups? It’s quite strange when you think about it right?

Where does all this come from?

I suspect it comes from big Agri-Business and ultimately from the government via companies like Monsanto.

Aside from the principles layed out by Atom Bergstrom in his book, Yes, No, Maybe: Chronobiotic Nutrition

there’s no reason why we can’t eat a paleo style meal for breakfast which includes some meat and steamed vegetables right?

I think we’re so used to eating a grain based breakfast of cereal, milk, toast, eggs and maybe some waffles or pancakes with syrup on them with some canned orange juice.

but what I am saying is that just like everything else in our lives, it might be time to question where we got these ideas from.

It might be time to overhaul how we think about everything in life.

Why can’t you have chicken with steamed vegetables like broccoli, asparagus and carrots for breakfast? Why do we want either a grain based breakfast or a green smoothie?

I think it might be time to at least think about this whole idea of there being “breakfast foods”, “lunch foods” and “dinner foods”. Food is food and we don’t need to get stuck in a rut of green smoothies or cereal for breakfast.

Now if you’re following the principles in Yes, No, Maybe: Chronobiotic Nutrition

or in the book Fit for Life

than that’s another story.

Bill Hencke (In Studio!) – How Pranic Healing Can Help You Heal From Disease & Supercharge Your Energy Levels