The Power Of Asking Questions vs Taking A Strong Position

The Power Of Asking Questions vs Taking A Strong Position

The world today is full of people who are very strongly opinionated.

People love to take strong positions on their ideas. Have you ever noticed this?

What happens when people take positions is that many times they can become so intertwined with their position on a particular matter, that they actually think the position becomes part of who they are. This is why people tend to act in a negative way or a very emotional way when you attack their position.

People don’t understand that they are separate from their position.

For example, let’s say they have an idea that a particular president is the greatest thing since sliced bread. They become so wrapped up in this idea, that they confusingly mix their position on a subject, with who they are as soul. 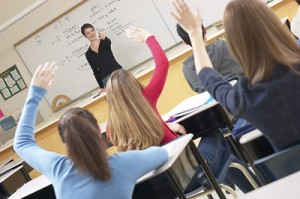 Have you ever been around someone who is a know it all? These are typically people who sometimes are young and idealistic, but most of the time they are extremely insecure with themselves. How strongly they hold onto a position typically correlates to the amount of insecurity they have. Perhaps they want people to think they are smarter than they really are. Perhaps they simply want to be more respected than they are. In any event it is extremely important to these people that people view them the way they want to be viewed. I realize I’m making extreme generalizations about people here but this is what I have seen in my life.

When you realize that you can learn from anybody and everybody, you start opening your heart in order to learn something new about a particular situation or idea. Humbleness seems to be an attribute that has been lost in our culture today. The reason why people don’t like to ask questions is because of how it will come across to other people. They are simply worried about what other people will think about them if they ask a question.

Just the other day I was doing dead lifts in the gym with a kid who was probably about 20 years old. He had never done dead lifts before and I knew just enough to get my form somewhat right. I have been doing dead lifts now for about six months. I know enough form to not get injured, but it is such a technical exercise that even being 1 inch off could result in injury. When performing this exercise it is critical to align your body properly and it takes a lot of practice to get it right.

Needless to say my form was a little bit better than the form of a guy I was working out with.

So this guy comes up to us and starts giving us advice about how to do the lift properly. Now I had just spent the last 15 minutes answering all the questions that kid had about dead lifts. Anyway the second guy who was giving us advice spoke mainly to the younger kid then to me. As he kept talking I realized this guy really knew what he was talking about. So instead of trying to be a know it all in the gym, I started asking the second guy all kinds of questions about how my form was.

If I really cared about what this kid thought of me I would have kept my mouth shut and allowed this second guy to spout off all of his advice and agreed with him. This would have made me look really knowledgeable.

But I would have lost out on all of the things that I learn that day about my dead lift form.

It’s important to keep a humble spirit and a humble attitude by realizing that we can learn from anybody.

Always Be A Learner

If you are always on the quest for learning new things, you will be humble by nature. If you think about it there are so many things that we do not know. So it makes very little sense to pretend like you know everything and take a position on everything.

Personally I like asking questions and looking at many angles of a particular situation rather than taking a hardline position that is black or white. Think about the word asking. I like it as it’s written above As-King.

As the king, or the person in charge it is your job to ask the questions. Think about any extremely high level corporate position or government position, they usually have a board of directors that sit around them and brief them on particular matters. And as the king they will be the one asking that all the questions. It’s always the responsibility of the peons to be able to deliver the answers to these questions.

People think that it is somehow demeaning or shows some sort of weakness if you are the one asking all the questions. But the person who asks all the questions is requiring other people to have the answers. And not only that they are the ones that are controlling the conversation.

People seem to have it backwards. If you’re asking questions what you’re really doing is demanding answers. People in charge are the ones you have to answer to. And not only that but you are free to change your mind about any particular issue any time you want. You see when you ask the questions and demand answers from people you are the one who has power over them not them over you.

Remember it’s the subjects who are the ones required to have all the answers. And by subjects I means slaves, workers or employees.

Be the guy that asks the questions, it’s much more freeing that way.

The Problem Of Making A Living Off Taking A Position

When people take a position on certain subjects or ideas, it’s one thing, but when people begin to make a living off of those ideas than it becomes an entirely different issue. Let’s say you are a trash man for a living. If you decide that you are interested in Marxism, it doesn’t really matter because your interest in Marxism has no relation to your income or your job. But if you are a college professor and are interested in Marxism or anarchism you better make sure that you don’t tell a lot of people about your positions.

Don’t you see how it can be such a huge problem tying your beliefs to your ability to make money?

Here’s another example, let’s say you are somebody who has lost hundreds of pounds by switching to a vegan diet. Then you start to change your entire career to help people switched to a vegan diet. You write books, you set up a web site, do radio interviews and you do all these things to help people and to convince people that the vegan diet is the most optimal diet for man.

Perhaps you even spend time debating people who eat meat about the efficacy of doing so. Then you become known in your community as the number one person or resource to go to if you want to follow a vegan diet.

Now you are in a conundrum which is sometimes called cognitive dissonance.

You can either follow the newfound path that you found yourself in which involves eating small amounts of animal products (and take the risk of perhaps alienating your vegan community and thereby decreasing the amount of money that you can make to feed your family), or you can simply not tell anybody about your new position.

I see this all the time with people like pastors, medical doctors, lawyers, teachers and professors.

Creating a career that is based upon your positions leaves you no room for growth as a human being.

Now for those of you who are the smart readers, you will say that I’m taking a position about the fact that people who take positions have a difficult time allowing their ideas to grow freely within themselves.

You’ll notice this all the time with people and I hope you recognize that in this article as well. I’m taking the position that positions are perhaps not the best ways to define yourself. I realize I’m doing it but most people do not realize that they do it. There is a level of awareness that many people lack in relation to how their ideas relate to the world.

Being the one that asks the questions is much more fun anyway. It allows for more personal growth by developing a level of humbleness and it forces you to use seen many different sides of the same situation as well as really puts you in control of the conversation and allows you to actually have more power than the person giving all the answers.

It’s really quite fun to be the one asking all the questions instead of giving all the answers there is much less to defend and it gives you the ability to recognize that you are not the position but rather at independence all that is completely different from the position.

In that vein I think I will end this article by asking a question.

Don’t you agree that asking questions is much more freeing than giving all the answers?

Has Kate Left The Show?, Controlled Opposition, Is Vaxxed A Psyop?, Does Conscious Resistance Work? & Much More!