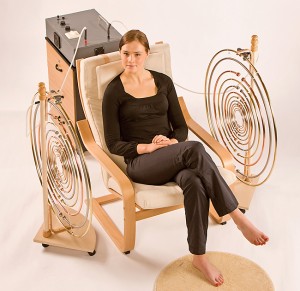 Oh, everyone has been inquiring about The Machine… it’s not online.. it’s a type of MultiWave Oscillator… from book Waves That Heal… but unlike the $18,000-$55,000 ones everyone else sells which are inferior too, (they sell like hotcakes whenever there’s an energy conference on energy devices for healing – like the las vegas expos healing energy conferences etc)  this one via the foundation is available for MUCH LESS…. the foundation got it available for everyone and refused to allow them to sell it at crazy pricing like everyone else’s … so … got the price down much better than the others that were developed since 30+ years ago that are still around…

Listen to how they did this:  They registered it thru the Dept of Energy and National Inst of Health for clinical trials… it’s working wonders… the body is reversing all sorts of diseases… when I was first told about this machine about 3 years ago the founder told me of the Pentagon lawyer who’s wife had MS… I asked how bad, she said not long to live too much longer..

I asked if she could at least still talk and eat her own food, she said no, I asked whoa, 1 month to live??? was she blinking for yes’es and no’es??  she said exactly and had been given one week left to live… I said what happened with the machine, well she asked them to come down to the foundation and put them under the machine 15 mins morning and night, and in 5 days she was walking and talking and they were both pissed!

the Lawyer was I cannot believe they keep these things from making it ot the market place…. She was sent then by the founder to Fla to do hyperbaric oxygen chamber treatments thereafter, so that was all fun LOL  Now since then, the clinical trials have progressed it’s been a few years now and the trials have been done in a few areas.. Harvard Univ Yale Univ and USC and few independent labs are all doing the trials, and Harvard is freaking out!   they aren’t legally allowed to release data yet but it’s being used on everything, men with their pet dogs with fatty tumors disappearing for good (so far) after 2 of the 30 day hits with 15 min morn and night just having dog sit on lap and pet them for 15 mins while machine runs hhe… detoxing affects are amazing too but the lymph musttt be working overtime b/c there’s not a drop of detoxing side effects!!!!

Only detoxing, like no more grey hair in about 2 to 4 months, founder’s hair lost all grey after 2 months, she stopped using the machine entirely for 6 months b4 it finally started to come back!  One 64 year old woman had white hair at 44 years old, so 20 years of premature problem hair, reversed completely back to perfect brunette in about 3 months was it?? anyway… yea, talk about detoxing, on top of which is the bone growth!!! now theoretically this shouldnt’ be growing bone so we are surmising only what this is doing b/c those with broken bones and with osteoporosis are getting normal bones back!! oh yea! Don’t count on it but it’s a nice side effect when it happens.

So here’s the founder’s and my theory sorta combined, it puts a resonance field thru the body… (you can even light a light bulb with it even tho bulb not plugged into anything… Now, thats power, this field runs thru the body for 15 mins – morn and night)  now when it goes thru the body it resonates the cells and severely increases speed of boyd happenings and thus it is forcing, much like MSM does, the removal of hardened filth from around the outside of cells, you may not know about this though… so quickie tutorial… this can’t be seen under regular microscope, but manyyy cells in the human body are just rotting for no reason than they are sooo clogged with filth around their outside like a garbage disposal team never picked up the garbage adn you can’t see it b/c it’s made a NEW layer of filth surrounding cells, I believe scientists figured this out originally on accident when they saw so many cells NOT OPEN UP when nutrients were trying to be delivered! they would try to open but like the garage door opener shorted in middle of opening then it would try over and over and over again, quite the nightmare yes???

Anyway this is all cleaned away and the cells open and get their nutrition finally ! Thus this is a partial explanation however, how do you explain no detox side effects despite cancer and diabetes and ostoeporosis and a massive amt of other diseases the body is reversing just like that/?? how?? simple… lymph system is working overtime and making it so that kidneys and liver etc are staying so fast in removing filth along with bowels all probs are disappearing via body enhancement right? Ie speed at which body systems do their work like bone growth and etc… well it’s all theory and does anyone care? it works..

Nothing on this page is intended to diagnose, treat or cure any physical problems or medical conditions. Information on this site is intended to be used for educational purposes only. The statements on this site have not been evaluated by the FDA, and as such, shall not be construed as medical advice, implied or otherwise. This machine is for investigational use only.

The price is the same no matter who you order thru – however please order thru me (not the above link) so that I can make sure the foundation gets a profit to use for their endless charity work, thanx so much!!! Robert von
940-233-0484

How To Heal Your Gums & Cavities by Robert von Sarbacher