Stop Cutting Corners And Be The Hero Of Your Life 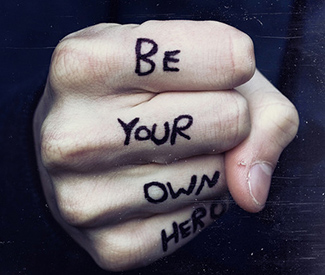 I’ve often wondered, what’s the difference between the person that finally gets fed up with their life and decides to make a change verses the person who seems to be okay with complacency and living a half ass life?

Why do some people seem to wake up and change while others keep living the same kind of lazy mundane existence?

There must be some kind of gene or chemical switch that goes off that makes a person change.

I can’t begin to know on a biological level what actually happens to a man that makes him say, “you know what? My life sucks and I’m not going to live this way anymore damnit!”

If you’re in the position right now where you’re sick and tired of living a life that’s boring and not fulfilling, I’m talking to you.

Are you tired of giving into that one temptation that you just can’t seem to shake? Are you tired of doing the same thing day after day for your job? Do you look back on your life after you graduated from school and think about all that lost opportunity?

Back then you had the world at your fingertips. Your life could have gone in one of a thousand different directions and it ended up where you are now. Imagine what could have been. There’s always time to change…

Do you hate yourself when you succumb to whatever temptation is your achilles heel? We all have weak links in the chain of our lives.

We all have things that are hard to say no to.

On Giving Into Temptation…

Whenever you give into your temptation, let me just say that you’re creating an energetic groove in the subconscious of your psyche, that becomes deeper and deeper each time you make that poor decision. Each time you screw up, you give yourself a reason to hate yourself. Each time you make a mistake it’s like you’re hijacking yourself for self pity and failure.

It becomes easier and easier to hate yourself and to lose respect for yourself with each passing “failure”.

Another thing to consider is that each time you give into your temptation you quite possibly could be creating energetic or psychic disturbances that could be affecting generations down the line in your family lineage. Is it possible to pass on personality traits to our children? What about traits whether they’re biological or energetic/emotional?

Remember in the Bible where it mentions punishing people for the sins of many generations in the past? Who knows how our actions, emotions and thoughts affect the subconscious and alter future generations?

The Time To Change Is Now

Stop with the excuses, stop with the self pity and stop blaming others. We’ve all had horrible things happen to us. But now is the time to draw the line in the sand and declare that from now on, you’re moving in a completely different direction.

Your life is forever going to be changed.

You’re going to start adopting daily disciplines that will cause even you to respect yourself. Seeing yourself challenge and push yourself beyond your limits actually makes you pretty impressed with you.

Start living like you’re the super hero of your own story. Start living a life that’s an example of how you’d like your kids to be. Don’t be that guy whose kid tells his friends that he wants to be nothing like his mom or dad.

It’s never too late to change.

Our culture makes it incredibly easy to become soft, lazy, and self deprecating. It’s easy to roll over in the morning when the alarm clock goes off and skip your morning workout.

It’s easy to go through a drive through and order some fast food instead of buying some organic produce and making a green juice after a long day at the office. It’s easy to cut corners in life. It’s easy to take the easy road out. It’s easy to make excuses and blame others.

All of these things are easy.

You start actually respecting yourself.

You become proud of yourself. Imagine that? This creates a snowball situation. Then it becomes easier for you to make those hard decisions (like not eating that ice cream at midnight).

Stop being life’s bitch. Stop making excuses and start asking what God wants out of you. What does life require of you? Why are you alive when other people have died at younger ages?

Think about that. Other people that are years younger than you have succumbed to diseases and accidents and lived a life cut short. Yet you’re alive right now. Why? What are you contributing to the world? What example are you leaving? How are you inspiring people?

No more excuses. You have one life to live, don’t waste it. Don’t squander it. Do something meaningful that people respect. Be that person other people wish they were but don’t know how.

You can do it but you have to respect yourself first.

Dr. Robert Rowen – How Decreasing Toxins, Eliminating Stress & Increasing Nutrition Can Increase Your Energy & Impact Every Area Of Your Life

Previous Post Kate’s New Venture Is Now Live & I’m So Proud Of Her! Next Post The Slippery Slope of Disrespecting Yourself