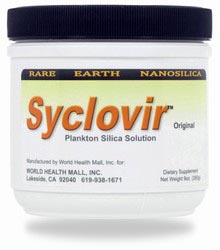 Having come out of a raw food diet for 7 years, I was noticing some symptoms of candida and yeast overgrowth. When you change your diet drastically (I went from a standard American diet to raw vegan) what little intestinal flora you have, can get radically disrupted. At least it did with me.

Syclovir for those that aren’t familiar is a rare earth plankton nano silica that comes in the form of a white powder. You mix it into water and drink it each morning on an empty stomach before breakfast.

By the way if you’re looking for a definitive book on this balance of good bacteria and bad bacteria, I’d suggest taking a look at The Body Ecology Diet

What people don’t understand about candida is that without candida, you’d die. Candida is not the problem, it’s a symptom. It’s your body’s way of telling you to stop poisioning it. Which in some aspects is very similar to cancer, at least according to Dr. Tullio Simoncini from Italy.

If you’re not familiar with his work he’s treating cancers as a form of fungus (thus the candida and yeast overgrowth connection) and having great success using sodium bicarbonate (baking soda) to quickly alter the ph of the tumor itself using direct application. As you can imagine, the medical industry over in Italy doesn’t like a doctor like this stripping from them a billion dollar business.

I was having some skin problems like seborrheic dermatitis as well as bloating, gas and sometimes a feeling of light headedness, being dizzy when I’d get up, mental fog etc. I know these can by symptoms of many other problems. I figured a good place to start would be candida and fungal overgrowth as it’s very common.

Some people like Omar Amin claim that skin problems like I was experiencing could be an allergic reaction to the parasite waste material that’s expelled when a parasite secrets its toxins. Other people like Aajonus Vonderplanitz claim that we all have bacteria and parasites so it’s important to NOT kill them but to live symbiotically with them.

I suspect like many things, the answer lies between the two. 😉

There’s a really great ebook called Yeast Infection No More by Linda Allen where she gives fully natural and holistic treatments for candida and yeast infections. I fully intend to try many of the options in her book when I can free up some extra money to buy the specific supplements she recommends.

In the mean time I’ve been hearing lots of good things about Syclovir for fungus by Jim Haszinger over at World Health Mall. I decided I’d like to give that a try first before I implement some of the strategies laid out in Yeast Infection No More.

My wife and I recently bought some Syclovir and I’d like to tell you about our experience with it. The box came in the mail in a couple of days. Fortunately I live only about 50 miles from where they ship it. I spoke with the guys on the phone and really connected with them. They seemed like nice genuine people. That’s always a plus because you never know who you’re buying from when you make online purchases.

They shipped it via Federal Express (or UPS I can’t fully remember) because one of them doesn’t irradiate the packages. I thought that was a nice touch. I felt like they cared about the integrity of the product and how they’re delivered, so that was nice.

I followed the recommended dosage and diet for about a week. Then as you progress you increase your intake of the Syclovir.

The Syclovir itself is a little sweet (it’s got some sort of sugar used for bait) but otherwise tastes like nothing. It’s really chalky. I didn’t follow the instructions as far as HOW to ingest it though. I’d put the recommended dosage in about 2 or 3 ounces of water (or however much you can fit in your mouth) and then chug it back like I was taking a shot of alcohol.

Immediately I’d follow that up with a big gulp of regular water. In the mornings I typically drink a liter of water upon waking up. They say you should add the dosage into 8 ounces of water. I didn’t want to ruin 8 ounces of water with Syclovir so drank it quickly in a shot and then drank the water alone. That seemed to work much better for me.

For about 3 and a half weeks I noticed no change in symptoms other than the fact that I’d get extremely tired around 5pm each day. I suspect I was killing off lots of organisms and fungal cells. I usually have lots of energy so this felt strange to me. Half the time I wouldn’t even remember why I was tired until my wife would remind me we’re on Syclovir. Duh.

Unfortuntely I didn’t stick with the diet. I did have raw cheese, mushrooms (reishi mushroom tea – I’m not sure how that fits in) and some cashews. I did lower my other sugar intake though as much as I could. I used stevia instead of honey so I think that helped.

It wasn’t until the very end of using Syclovir did I start to notice some changes happening. Perhaps I was riddled with candida and it took that long to shake things up and get a handle of it inside my body. I noticed my bloating after eating meals was less of an issue. I noticed that my skin rash under my eyes started to diminish.

So I’m thinking it worked. I also did consume lots of bacteria rich sauerkraut that I fermented at home. Having live benficial orgainisms and acidopholus was really key in helping to restore balance in my gut of good and bad bacteria.

No sense killing bad bacteria if you don’t replenish with good bacteria right?

If you’re looking to try out Syclovir by Jim Haszinger over at World Health Mall (I don’t get paid to write this) I would suggest you try it out. You might want to call the guys and talk to them about specific foods in your diet. I should have talked with them about reishi tea I drink and if there’s a difference from eating grocery store cheese verses raw grass fed cultured organic cheese from happy animals.

In terms of bacteria and yeast, I suspect there’s a difference and it would be okay. But I should have checked with them first. Like I said, I started to notice some changes after 3 and a half weeks. If you do it, follow the food guide they send along with the Syclovir and stick to it. Increase your good bacteria with fermented foods and you should have a goot 3 pronged approach to beating candida.

I’m going to buy another bottle to continue the protocol.

If you’ve ever used it let us know your experience below!

Sofia Smallstorm – COVID19 Is Creating A New Type Of Human, 5G & Much More!