My Experience Doing An Enema For The First Time 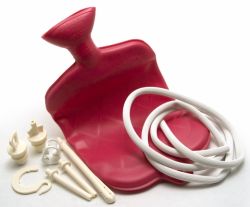 I’ve known about all the benefits to doing enemas for years. I actually learned about how great they are from David Wolfe back in 2003 and it’s only taken me 10 years to do one.

I can’t believe how incredibly long it takes me to do these types of things!

Are you the same way?

Anyway enemas can be done with lots of different solutions. Some people like Matt Monarch advocate (last time I checked) doing them with just water. Others like Jessica Ainscough teaches people to do them using coffee. She learned about how to do an enema from the good people at The Gerson Therapy.

People healing from cancer need powerful enemas that really detox since they’re treating people with late stage cancers. They’re having great success with that by the way!

I’ve even heard of people using ozone, probiotics, MMS and other substances.

Because we live in such a toxic world it’s almost imperative to start introducing some kind of detoxification strategies in your daily regimen. You can’t keep building up toxins, poisons and chemicals and expect to remain healthy. I love to use the silica rich sacred clay from Vitality Herbs and Clay (tell Michael King we sent you and get 2 weeks worth of free product!) as well as things like zeolite to remove heavy metals.

I also like to sweat out toxins in our sauna as well as do rebounding to stimulate the lymphatic system which removes toxins as well. But you can’t live in our toxic world and expect to be healthy without doing anything about it.

It’s just not going to happen. Dr. Max Gerson was a huge fan of them because they reduce toxic levels by up to 700%. Enemas are also great for digestion, skin, hair and nails too for those of you out there that like to look good! 🙂

If you want to live a long, healthy, disease free life I believe doing enemas at least once a week if not twice should be a part of anybody’s protocol to sustain vigor and vitality into your later years.

My Experience After My First Enema

We watched the video below and followed Jessica’s instructions to a T. If you’re unfamiliar with Jessican Ainscough she had a rare form of cancer in her arm and the doctors said it was so rare they couldn’t help her and gave her a specific period of time that she would live.

She didn’t buy into the bill of goods the doctors were selling her.

She followed The Gerson Therapy for 2 or 3 years. She did multiple enemas per day and purchased a Norwalk Juicer and juiced 8 ounces of fresh vegetable juice every hour for 16 hours a day for 3 years.

Talk about dedication and commitment. She’s got a real inspirational story over on her website if you want to follow what she has going on.

I did about 3 or 4 rounds of taking in the coffee water mixture. I had some issues learning how to do it correctly but eventually I got the hang of it.

I have to say after I was done I felt a high similar to being drunk. My head was a bit spacey and I was kind of out of it. I felt really high afterwards as if I had had a few glasses of wine.

But I wasn’t out of it like you would be if you were drunk. It was as if I was as high as the clouds in a strange weird way. Perhaps I was detoxing or something.

Then the next day things flip flopped completely. I felt fine and Kate felt strange. I guess it all depends on how toxic we are, what we’ve eaten recently, our stress levels and probably a thousand other factors that determines how you react to an enema.

I would guess that it would affect you differently each time!

So if you feel sick afterwards don’t sweat it, you’ll do fine. It doesn’t wipe out your beneficial gut flora or make you dependent on them to have bowel moments. In my personal experience I believe they’re safe and a great tool to take your health to the next level.

And I believe they’re great if you need to recover from catastrophic disease!

Have you ever done an enema and what did you experience the first time you did one?

Dr. Ed Park – Can Telomere Activation Allow Us To Live To 200 Years Old & What Are The Implications?

Dr. Andrew Saul – Can High Dose Vitamin C Help The Body To Heal Itself From Colds, Cancer & Other Diseases?

Previous Post Why Are People So Addicted & Unwilling To Change? Next Post Chris Kehler – Energy Medicine: How The Aura, & Etheric Template Affect The Physical Body