.” MMS is basically two FDA approved solutions but when mixed turns into chlorine dioxite, which is not FDA approved. It has been referred to as stabalized oxygen.

Basically MMS is result of mixing sodium chlorite with an acid (like lemon juice or by using the activator you can buy) which then releases chlorine dioxide in your body. And the chlorine dioxide is the MMS which helps destroy pathogens.

As I’ve been learning over the years, every disease known to man is caused by either a bacteria, virus, fungus or yeast. These pathogens are what cause all diseases. 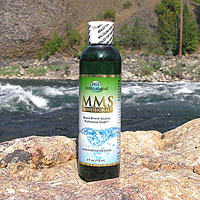 Here’s the kicker. According to the literature, MMS can kill these pathogens by destroying the coating around these pathogenic cells. Now people think wow if it kills these types of cells in my body does it kill good cells to?

According to the research, no. Otherwise we could just call it chemotherapy. According to Jim Humble who stubled upon mixing these two solutions together, it kills pathogenic cells only because the cell walls of these cell walls are extremely thin. All the other cells in our body according to him, have much thicker cell walls to the MMS doesn’t destroy them.

So if all diseases are caused by these four microscopic pathogens, then you can start to see how Miracle Mineral Solution

MMS can be used to treat just about anything. It’s at that piont that many people either think it’s too good to be true, or just plain don’t want to believe it.

I mean how could MMS get rid of parkinsons, cancer, colds, skin problems, hair problems, arthritis, adhd, acne, malaria, multiple sclerosis and the list goes on. Think of a disease or condition and MMS probably get rid of it.

How the heck is this possible? Well if all diseases are caused by the 4 pathogens mentioned above, then you can see how this works.

I actually bought the product from project green life a few weeks back. I bought it because I wanted to use it for cancer prevention (that would be the maintenance dose), a few skin warts, some hair loss and a touch of candida just for kicks. I also bought two bottles for my parents for cancer prevention as well.

So one day I decided it was time to get going on it. When it comes it comes with this huge FDA warning about its safety. Here’s another video about the FDA warning. Many people can get scared off by that little paper that comes with MMS. I figure, anything the FDA doesn’t like, I want. And judging by how the FDA treated Dr. Burzynski

How I Started Out Using MMS

For the 1000 protocol you’re supposed to mix 24 drops of sodium chlorite with 24 drops of the activator. When I first smelled what they smelled like combined I figured that was too much. Plus on their website they talk about how some people have to ease into it. The standard protocol calls for 3 drops activated MMS every hour for 8 hours per day. Because I’m not much of all or nothing guy and don’t like to jump into things 100%, I started with a half a drop.

I added 4 drops of the sodium chlorite and 4 drops of the activator and put it into a liter water bottle and put 8 marks on it. When I added the water to the solution, it started smoking just a little bit like when you open a coke can or something.

Like I said, I started using a half a drop and will work my way up to the full 3 drops. Day 1 I used 4 drops of each. On day 2 I’ll use 6 drops of each and so on until I get to the 24 drop dosage for the MMS 1000 protocol. Some people can dive right into the full dosage but I couldn’t do it.

I plan on doing this 1000 protocol a couple times per year and the rest of the time just stay on the maintenance dose internally. If I have anything externally like brushing my teeth or skin problems I’ll probably use it for that as needed.

What I’ve Felt So Far

The first day I didn’t notice much of anything other than a little bloating. I think that was because I had MMS near the time I ate a bunch of raw chocolate. So as the days progress I’ll let you know what happens with my experience with the MMS 1000 protocol.

The next step is to get my wife on it along with my parents. They are all really into health and doing things each day that are good for them. It’s hard to explain everything this stuff supposedly does so I’m going to get them to watch a few videos and listen to some lectures so they can understand more about it.

Kerri Rivera – Is MMS A Viable Treatment For Autism? Kerri Rivera Shares Her Stories of Success & Much More!