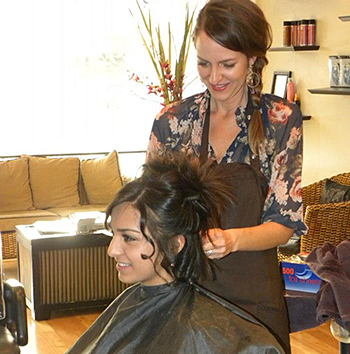 It’s been something Kate and I have talked about for a couple of years now and it feels amazing.

For us, this is an incredible milestone and something we are extremely proud of.

Kate has now dropped her work at the salon down to one day a week.

People say in this economy you need to take all the work you can get.

True, but what if your work is killing you? Here’s a few reasons why the job of a hairstylist is toxic and even deadly.

There’s so much drama and gossip in the salons and all Kate wants to do is work. For so long Kate’s entire life it seems has been wrapped up in pleasing people and making them happy at the expense of her own health.

We’ve relied quite a bit on her money over the past couple years as I have been building Extreme Health Radio. Now our show (thanks to you!) is finally starting to earn just enough where she can drop her hours down at the salon to one day a week.

Walking away from a career that you’re incredibly talented at and successful at isn’t easy. She’s put 15 years of work into her career and we’re now realizing that it’s time to step away for a while.

As we know from this show stress is (in my opinion) the root cause of all disease. Stress, negativity, judgement are all low energy emotions and frequencies that pull us further and further away from peak health.

Just getting through the day isn’t going to cut it anymore. Recently we heard an interview with medical doctor Lissa Rankin and she had a similar situation where she walked away from her uber successful medical practice that was killing her.

She was on multiple medications at the early age of 32 and was on the fast track to a heart attack in her 40’s if something didn’t change. As a result of multiple situations coming together, she battled with herself about walking away from her job and the only source of income for her family.

Then a voice in her head asked her, “Okay that’s fine if you don’t quit, but are you willing to die in your 40’s?”

She knew in that exact moment that now is the time. Money, debt and finances will always be there. Somehow she realized she’ll make it. She had to radically change her life and her life style in order to figure out who she is again.

She had lost herself in her work and in her toxic career and didn’t even know how she was becoming as a result.

The same thing was happening with Kate. Her job was killing her and so after long conversations and a lot of talk about how we’re going to make it, decided to take the plunge and step out in faith and see what happens.

We can’t encourage you guys to do the same if we’re not willing to step out in faith ourselves.

Are we worried? Everybody tells us we should be. Do we know how it’s all going to work? Nope. Do we have a plan? Not really. We’re just taking this HUGE leap of faith and seeing what happens. Do we need her money right now? Completely.

She really wants to focus on helping people, that’s the bottom line.

When you build a business based on helping people, the money will follow.

What about you are you in similar cross roads where you’re doing a job you might really hate but you have a passion on the side you’d like to become your full time career?

It’s very challenging in today’s economy but it can be done if your’e focused on genuinely helping people and provide some sort of product or service that can help other people achieve their goals or solve their problems.

We wouldn’t be able to do this if it weren’t for you. You guys are the main reason we’re doing this. The feedback we get from you is incredible and we’re humbled to have an impact to some degree on your lives.

We’ve received so much confirmation that this is the right choice for us via email and other messages, it’s very reassuring. On top of you guys making us feel good about this move, we can’t be more excited because now Kate gets to spend more time each day helping you and being a part of this show.

It’s not about us. This is about you. So thank you for allowing this to be a possibility for us right now. Both of us can’t even begin to express the gratitude we have for every single one of you.

It’s humbling and with that comes lots of responsibility.

We’re always in your service. 🙂

Previous Post I Fought an Octopus and it Won! Next Post 3 Things To Do After You Eat Crappy Food