1 Share
[smart_track_player url=”http://traffic.libsyn.com/justinsaudioblog/jab241-float-tank.mp3″ color=”34672e” title=”How To Develop Self Worth So You’re Motivated To Take Care of Yourself” artist=”Justin stellman”] 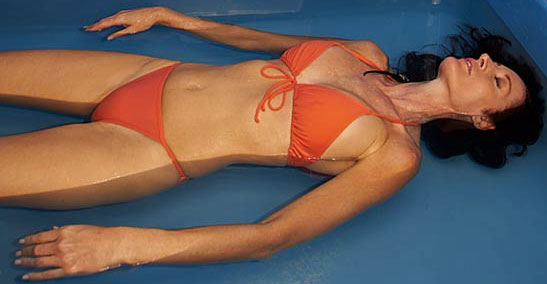 I explain floating to people all the time and most of the time they look at me strange. “Why would I want to do that?” they’ll ask or “I’ll probably get claustrophobic in there, that’s not my thing”.

When people don’t understand something it’s easy for them to write it off.

I believe for two reasons.

I remember a quote that said…

So What Is Floating?

You get into a tank which looks like a meat locker that has no lock on it. It’s filled with about 12 inches of water that holds 800 pounds of magnesium salt which makes your body float.

The inside of the sensory deprivation tank is completely silent. You cannot hear a thing. With the earplugs in you can only hear your breath and your heart beating.

It’s unlike any other environment I’ve ever experienced. You can’t get that kind of silence anywhere. There’s something that happens in our modern world in terms of noise.

All noise is a stressor and when you remove all noise your body finally gets a chance to relax for perhaps the first time ever.

The next sense that’s taken from you is smell. Inside the chamber it has zero smell. The water is purified and cleaned each time somebody leaves and if the tank is constructed properly you won’t smell anything.

One less sensory input your brain doesn’t have to deal with.

The other sense that’s no longer there is sight. You’re essentially blind. Even when I go to bed at night and it’s as dark as it’ll be, there’s still some semblance of light. I can see shapes and I can perceive distances and such.

But when you are in the float tank, there’s absolutely no difference whether or not your eyes are open or closed. It’s quite strange.

Your brain takes in the information and depending on how you process it, it could be a source of major stress for you. You see everything that comes in via our five senses we overlay with our emotions, our traumas and all the stories we tell ourselves about how we see the world.

This is the issue. We put our spin on everything that we come into contact with.

The float tank is the only environment in the entire galaxy where your brain and nervous system can actually rest. Think of being in the chamber like doing a 40 day juice fast.

Instead of giving your digestion a rest you’re giving all five senses a complete rest. You can’t even do that while sleeping because there’s noise you feel the bed and so forth.

Many people try to meditate to reach this theta brain wave state but even still you’re experiencing your body and some senses are coming in and your mind must deal with them.

So What Does The Float Tank Do?

Well on a purely physical level it restores tremendous amounts of magnesium to the body. And for those that want to learn more about the benefits of magnesium just listen to this.

But since your brain and entire nervous system gets shut off, you can actually start healing on a deep level. Your body can start using that stored energy (or Qi) to heal its organs and tissues.

On a much deeper level you can reach very deep states of meditation and enlightenment inside the float tank. People have reported seeing visions of people almost in a dream like state. Some people even report traveling to the center of the universe in a trance like state.

When you shut down all 5 senses in your body and start flooding it with the magical mineral called magnesium it’s anybody’s guess as to what’s possible when you’re floating.

We go to Newport Float Therapy where our friend Ron Becker is the owner. Let him know extremehealthradio (Justin and Kate) sent you and he’ll give you a discount.

But either way, start floating and let me know what you think!

Dr. Mark Sircus – Why You Should Be Consuming Molecular Hydrogen For Optimal Health