I No Longer Have Hypertrophic Cardiomyopathy – Extreme Health Radio

I No Longer Have Hypertrophic Cardiomyopathy 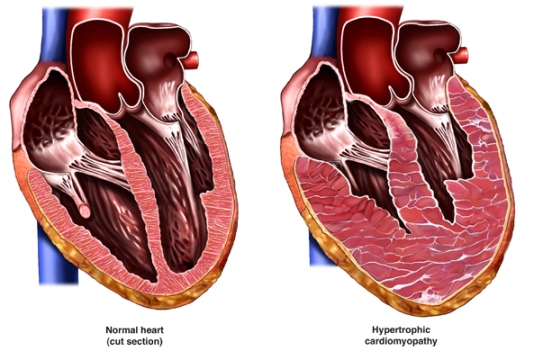 I for one find it extremely interesting that in our culture we place so much merit and value on the opinions of people who we perceive as “authority” figures.

This ultimate respect for authority is beat into us at every level beginning in the earliest years of child hood. We’re told to not speak unless spoken to. We’re taught to answer questions. We’re taught to not question anything that an older person is telling us.

After all, they’re older, smarter and wiser than we are, so why shouldn’t we believe them? They have our best interest in mind don’t they?

How does this all cycle back to no longer having hypertrophic cardiomyopathy you say? Well for those that don’t know as a kid in High School I was diagnosed with Hypertrophic Cardiomyopathy while playing basketball.

This was during the time when Hank Gathers (who I’m told died not from hypertrophic cardiomyopathy but from the beta blocker medications he was on coupled with high intensity exercise), Reggie Lewis and a whole host of other professional athletes and even high school football players were dropping dead from heart attacks.

Needless to say I had to quit my most favorite thing in the world, playing basketball because of my new found heart condition. I had to give up millions I would have earned playing point guard for the Lakers and my budding athletic career. Yea right.

But I did love it and when the doctor came back into the room and told me I have a rare heart condition called hypertrophic cardiomyopathy I was devastated. I was then concerned with how long I might live with this condition and whether or not I’d ever die of a heart attack.

Obviously back then as a 15 year old kid I didn’t have the emotional intelligence to understand how emotions and our thoughts play a role in our health and healing.

Burdened by thoughts of dropping dead from a heart attack I continued living my life without basketball.

It always plagued me that I was somehow defective. In the back of my mind I didn’t want to exert myself too much when I was hiking or surfing or even running for fear of what this hypertrophic cardiomyopathy could end up doing to me.

I was told that I’d never get rid of it and you’ll have this condition for the rest of your life.

Good thing I stopped believing in my doctor.

I was told I had a very significant heart murmur and people end up dying from this condition. Aren’t the doctors nice? Isn’t it great that help empower people so they’re not dependent on them anymore?

I’m so glad doctors aren’t involved in spreading fear so their patients can really heal.

Ahh it feels nice we are in such great hands.

In reality it’s up to us to change our thoughts about how our bodies work. When all knowledge is instant and 2 clicks away from a Google search, then it’s nobody’s fault but our own if we want to keep living in a constant state of fear and self deprecating dependence.

Here’s where the story of my hypertrophic cardiomyopathy takes a turn…..for the better.

Anyway he told me that whoever diagnosed me was either wrong, didn’t look at the heart from all the angles he did, I outgrew it or I simply healed it. He said whatever he’s seeing shows no sign up hypertrophic cardiomyopathy.

What the heck happened?

Perhaps I never had this condition in the first place?

Or maybe even weirder, maybe I actually did get this condition (not because I actually had it) but because the doctors told me I had it. Maybe I got it as the result of the diagnosis itself. Perhaps my heart was fine before I was diagnosed and their diagnosis wasn’t 100% accurate because of the technology back in the early 1990’s.

So all this time I’ve been believing I was somehow broken. I was defective. I wasn’t as healthy as other people.

I believe this story I told myself

. It was a story that I told myself every single day.

Our health changes every second of every day based on the stories we tell ourselves.

The fact that this ultra sound technician at the Dayton Medical Center told me I didn’t have this heart condition anymore, is itself a new story right? I can believe it or not.

Is even this new story true?

Only if I tell myself it is. What’s true is what we tell ourselves.

Perhaps we need to start telling ourselves a different story don’t you think?

5 Tips For Surviving A Heart Attack When You’re Alone