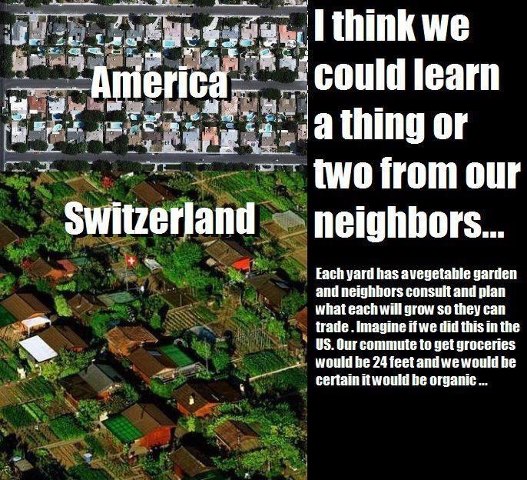 Yesterday Kate and I were walking Maggie in the morning before our interview and as we were walking up from the beach we were talking about how great it would be to have tons of land and have a huge garden one day. Then she asked me if I had seen that info graphic that has been floating around Facebook that shows an areal shot of typical American backyard homes (full of concreted and pools) compared to those in Switzerland (filled with green plants and food forests).

The intent of the picture it seems is to have people realize that we could all be growing our own organic fresh fruits and vegetables (and herbs) for ourselves (and each other) instead of having backyards full of concrete, and pools filled with chlorinated water.

Isn’t it interesting life here in America? Everybody seems to live next to neighbors but not even know them. People come home from work drive right into their garages and it closes before they even get out of the car.

When people come home from work, they might stay inside the house until they go to sleep. The next day they get up, go to work and do it all over again. People might go a full week and never really walk around their neighborhood or even see their neighbors because they’re all doing the same thing.

Imagine if everybody in that neighborhood felt a duty to grow food for the other neighbors. We often get stuck into a mindset of growing a garden for our own family or household. So if Fall or Winter came and we decided to be lazy and let the garden go, that’s no big deal right? We’re the only ones benefiting from it so what does it matter?

Well if you lived a more communal life you couldn’t do that because you had a responsibility to your neighbors to grow food for them.

Let’s say you were responsible for apples. You’d only have to have a few apple trees instead of a huge garden with tons of different edible plants. One neighbor could be in charge of eggs, another for raw milk if they had cows or goats. Everybody could be responsible for just one type of food.

It would be less of a burden on each neighbor to only have to be responsible for one food item instead of having the entire food production system on their own property.

I love the idea of going into this as a group.

Not only is this a good idea for food on a daily basis but it’s also an amazing thing in case disaster strikes. All the people in the neighborhood could rely on each other and barter for emergency preparedness items in times of need. Personally I suggest getting something like a Seed Can to have on hand in case of emergency and if your neighbors all had one too, imagine the abundance you would all be living in, should a disaster strikes?

Maybe all of us living in tightly woven sections is part of some kind of population control. Who knows.

But what if you made flyers online and put them in all the mailboxes in your neighborhood letting them know of a meeting coming up that you could organize in your home or local multi-purpose room?

And during that presentation you could ascertain a general level of interest, start an email list and build a physical community around people that would be interested in doing this.

What a great idea right?

It’s something to think about most definitely. Kate and I are going to consider how we might do this in our own neighborhood. It would be an excellent way to get to know your neighbors and let everybody know who they can rely on in case disaster strikes.

The other benefit is that instead of using gas and driving to a grocery store and giving them your money for fruits and vegetables, you can walk down the street and trade your garlic and onions for their apples and oranges.

How cool is that?

If this idea strikes a chord within you, consider making some flyers online and learning how to grow some food and organize 10 or 15 households in your neighborhood to begin such a project! You might be able to organize something on meetup.com.

What do you think? Comment below and let me know your thoughts!

Jackie Dumaine – How She Quit Her Six Figure Corporate Sales Job & Decided To Pursue Her Passion Of Teaching The Yoga Code & Much More!