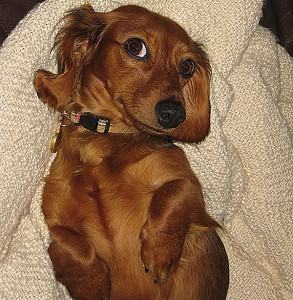 For those that don’t know our little 10 pound wiener dog has been on the BARF diet for about 45 days now during her 90 challenge. I have to say I was a little hesitant to talk about her progress because because she was already on a raw food diet.

But there were some significant differences in the two diets she’s been on. The BARF diet she’s been on includes bones (which is huge for their health) as well as organ meats. You see animals wouldn’t just eat the muscle meat of any prey they were able to kill.

They’d eat the whole animal most likely which would include the stomach contents, organs, bones and muscle meat. So although the diet we were feeding her was raw it didn’t include all of these improvements.

I’d like to report that it’s interesting to note that she is seeing some pretty significant changes which I’d like to discuss a little bit below.

In case you’re wondering what the heck is a BARF diet (because that’s sounds disgusting!) you can go to this link http://www.barfworld.com or you can watch some pretty interesting videos about it by clicking here. The BARF diet for dogs stands for Biologically Appropriate Raw Food Diet.

As if she needed any more energy than she had, she seems to have more. Now I don’t know if I’m reading into that but it definitely seems that way. Her legs are only a couple inches long and we’ll go on long walks that she could have never done before.

Even in the winter time (when she seems to have the most energy because it’s colder) she wouldn’t be able to complete some of the long walks we do now. We’ll walk for over an hour sometimes maybe 5 miles in the middle of the hot day in the sun and she’s pulling me on the leash!

Before the BARF diet she would have chronic constipation or she wouldn’t deficate completely. It was as if there was something wrong with her digestion. As gross as this sounds, when we’d walk her she would squat to go poop and it wouldn’t all come out. She would look like she’d be done going to the bathroom but then she just wouldn’t walk. Right away she’d stop and look at us. Then we’d have to manually help her and let me tell you, that’s not a fun job to do!

But all that has completely stopped. She has zero problem going number two!

Her coat seems to have a shine on it that it didn’t have before. Now to be completely honest there’s no way I can verify that but it seems to be the cast to me at least. I can notice it. I will say though the the BARF diet isn’t doing a darn thing for the dreadlocks she gets behind her ears. She’s a hot mess! 😉

Dachshunds apparently have teeth problems and I didn’t even know this. Her teeth seem healthier and I think her breath doesn’t nearly smell as bad. In fact I love puppy breath!

I don’t know if the diet is the result of the fleas being less but this year, they’re almost non existent. That could be a complete coincidence so I can’t prove any of this but I do know her flea problems has dropped by probably 90%. During this time of year she’d be itching and scratching every few minutes. But she barely scratches or itches herself at all.

Perhaps there are just less fleas this year too? Like I said I can’t know this for sure but I do know that her diet changes and now she has less fleas so take that for what it’s worth. I’m not saying your dog will have the same reaction because all dogs are different but it is a pretty significant thing to bring up here and for what it’s worth, I think the diet had SOME change with her flea problems.

Either she would have constipation, wouldn’t be able to have the stools exit her body or she used to have diarrhea pretty often during her walks. She’s such a small dog so it wouldn’t make that much of a mess but it was a little concerning. We walk her 3 times a day and I probably go on 2 of them on average and I haven’t noticed one bout of diarrhea since changing her diet.

Coincidence? Maybe but we know that diet plays a huge role in every aspect of their health and the life of a dog. It’s the same with humans!

So if you’re considering going on the BARF diet you might want to give it a try and see how your dog responds in 90 days. If you decide to go on the challenge please share your thoughts here or comment below!

Dayna Martin – On The Rise & Popularity Of The Unschooling Movement