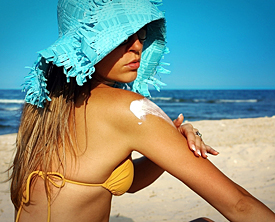 Have you ever been told by people like your parents or spouse that you need to start wearing sunscreen?

I get that all the time. Normally it’s coming from people who just don’t understand what I understand about how cancer starts and where it comes from.

The sun doesn’t CAUSE cancer.

If it did we would never have evolved to be able to adapt to it. Or as I believe, God would never have created the sun which is necessary for all life, to give us cancer. Why would the same thing support life and then destroy life?

That’s not to say that excessive sun exposure is okay. There are lots of factors that go into deciding whether or not sunlight is going to be damaging to your health. It depends on what latitude you’re getting this exposure in, what time of day it is, your skin tone, melanin and pigment levels and most importantly your diet and lifestyle.

Blanket statements that the sun is harmful is simply not true.

A simple platitude that the sun causes skin cancer so you must wear sunscreen probably comes from somebody who saw a commercial that said this. Or they got this information from their doctor and never questioned the efficacy of it.

My question is, where did the doctor get this information? Did he get it from an independent study or from a pharmaceutical drug company rep? Was the study double blind, who funded the study?

It’s easier to believe in and sell platitudes.

As somebody who is a surfer and loves the summer, I rarely wear sunscreen. My dermatoligist a few years ago told me to never go into the sun during the hours of 12 to 3 during the summer and always avoid direct sunlight. I guess I should just stop being human and avoid doing the things I love. Maybe I can be the boy in the bubble? Or maybe I can never go outside ever again.

He was adamant about it. So much so that I think he was trying to scare me. Poor guy, just doesn’t understand.

It’s my contention that if we do the exact opposite of what the medical establishment tells us, then we’ll be right where we want to be.

I will say though that I probably get too much sun and I need to be aware of how much I’m getting. I’m trying to remember to sit in the shade more under the umbrella while at the beach. On the flip side, I make sure to get direct sunlight, especially coming in through the eyes.

I don’t stare at or even look at the sun, unless I’m sun gazing right before sunset but I let it reflect into my vision. For this reason I rarely wear sunglasses.

Vitamin D is really not a vitamin at all it’s a secosteroid. A Secosteroid is almost the same as a steroid other than the fact that 2 of the B-ring carbon atoms (C9 and 10) of the normal 4 steroid rings are not joined together, whereas in steroids they are.

When we prevent the rays of the sun from hitting our exposed skin, it prevents vitamin D from being absorbed into the body. As we know vitamin D is critical for so many cellular interactions within the body.

2. Sunscreen Is A Chemical Poison

Your body was never meant to ingest anything through the skin. Although the skin can be a great way to take in healing substances like DMSO, aloe vera and natural lotions. The problem is that when a substance is allowed to pass through the skin layers it completely bypasses the stomach acid (designed to kill bacteria, viruses and pathogens), the intestinal tract and liver. Which is the reason why vaccinations are so dangerous.

When you’re using a natural substance the body knows what to do do with, by passing these “filter” organs can be helpful for a short term healing crisis. But when you’re applying chemicals on the skin they get absorbed directly into the blood stream without any filtering at all.

This allows these toxins and chemicals to directly impact cellular respiration and metabolism causing free radical damage and an acute immune response of white blood cells. Your body starts attacking these chemicals like they’re foreign invaders, which they are.

The immune system starts deploying all of your white blood cells to deal with this attack while it cannot fight off any other issues your body has.

All of this happens without you knowing and without you even feeling a thing. If anything, you feel good because you think you’re doing the right thing.

The body is designed to have “catch all” organs in place to filter out toxins it is exposed to. When these toxins are allowed into the body without impunity (imagine an assassin allowed to walk into the white house right past the guards), all havoc can ensue at the cellular level.

It’s bad enough that these toxins come into the body in the first place, but to allow them in unfiltered is the real problem. It overwhelms your organs to such a degree that the immune system can’t put out the other fires you’ve cause elsewhere in the body.

3. It Supports Companies You Probably Don’t Believe In

One of the biggest impacts we can have in this plutocracy (the rule of money where governments become intertwined with corporations) is how and where we spend our money. A financial impact is quite literally the only impact that matters to these companies.

Every time we spend our dollar, we should ask ourselves if the place where we spent it aligns with our values. If it does, then we can in good conscience support them. If their ethics are not aligned with our values, why would we support them? It’s like feeding the enemy food so they can continue creating a world that we don’t want.

I don’t believe that companies like Coppertone or Banana Boat align with my interests so I choose not to support them. The lies about the sun and its relation to cancer are propagated by dermatologists, makers of sun screen and politics. Why would we want to give more money to these entities to they can continue spreading the lies that if believed will ultimately injure or kill more people?