14 Questions To Ask If People Tell You To Avoid Meat

14 Questions To Ask If People Tell You To Avoid Meat 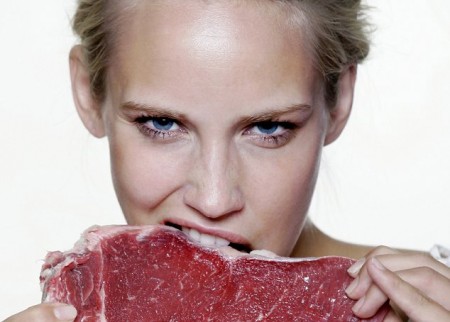 It seems like there are many people out there (even guests on this show) who make dietary platitudes.

Have you heard them do this?

They’ll say things like, “You should avoid meat because XYZ”

You could fill in XYZ with any statement you want or even the word meat.

Some people say you should avoid all dairy while other say it’s the best thing since sliced bread (well not really).

So what are we to do?

Kate and I talk about this all the time. What the heck are we supposed to eat? Gradually, little by little staple foods are being taken away from our diet. Well not really we take them away ourselves but you know what I mean.

Will we go back to these foods on day?

At least these people had specific reasons for avoiding specific foods. When I hear people make blanket statements about broad categories of food, I feel like before I can believe it I have to ask A LOT more questions.

For this example let’s tackle the issue with regard to meat products. Now as an aside, I have to say I’m not promoting eating meat or not eating meat. Right now we eat meat. In the future as we learn more I may go back to being a 100% raw food vegan. I have no attachments or presuppositions that I’m trying to promote. I have no agenda.

We all need to ask ourselves questions and come to our own conclusions with regard to what we eat.

Being in an open non attached space when it comes to our own diet helps a lot. And to be honest, the more I learn about health, longevity and diet, the more I realize I don’t know what the hell to eat anymore! 😉

Anyway let’s say someone tells you or me to avoid “meat”. Here are some questions I might ask myself or the person so I can know exactly what they’re talking about when they say “meat”.

This is a big question right? Cooked meat is very much different than raw meat. What are they referring to when they say meat?

What time of day do you eat it?

I recently wrote an article about the timing of eating foods. According to Atom Bergstrom it is a HUGE deal. If you eat meat (or any food) at the correct time not only will it provide your body with more nutrients (according to the theory of Chronobiotic Nutrition

) but it will also offset any damage that food causes.

Are the cows eating grass?

This is huge and might be one of the deciding factors on whether or not “meat” is good for you or not. I’ve heard “grass fed” can apply to any cow that’s at one time in their lives eaten a blade of grass. Isn’t it funny how you have to drill down to get to the meaning of things? The term I’m hearing now is “grass finished”. You want to make sure the cow is eating grass all the way up to the point where it dies.

Grass fed can just mean the cow at one point in their lives simply ate a little grass.

If the cow is eating corn that may not be optimal. Again we have to ask what kind of corn? Distinctions need to made every time you eat.

The higher up on the food chain the more complicated it becomes in terms of health. You have to be concerned with so many more factors.

Is the grass watered with ocean water?

Even if the cow is eating grass, how is that grass being watered? No use having a cow eat grass if that grass is watered with municipal tap water containing fluoride, calcium and a whole host of other chemicals.

We know grass is the only substance on earth that can uptake all 92 minerals if they exist in the soil. Perhaps it also has the ability to uptake more unhealthy components like calcium, fluoride and pharmaceutical chemicals.

It would be ideal if the cows ate grass free from chem-trail debris as well as watered with diluted ocean water.

If not even “grass finished” might not be optimal.

Is the animal hybridized or wild?

Who asks this question? Well Daniel Vitalis would that’s for sure. A cow is a genetic hybrid of the Aurochs which is now extinct. I heard David Wolfe at one time mention we shouldn’t eat seedless fruit because of its affect on our ability to produce seed and reproduce.

What happens when we consume products (animal in this case) from animals that are not wild? We’ve created these cows and hybridized them. They’re not natural. If the person is telling you to avoid red meat, are they talking about the meat from wild animals or hybridized animals?

I suspect eating the flesh or by products from hybridized animals might not be best in the long term.

How was it killed?

This is huge. Was it killed and hunted humanely? I know of a ranch in Texas that actually kills the animals at night with one shot and the animal goes night night. You might think this is cruel but is it not a step up from the slaughterhouse?

When the cow anticipates and fights its own death, they’re releasing cortisol and other stress hormones that I contend energetically transfer into their meat and other products.

These energetic vibrations get into our bodies and that’s less than excellent.

Are you food combining properly when eating it?

Food combining is huge. Let’s say “red meat” is good for you. Just for the sake of argument. You might combine it wrong and your body may not like it. It doesn’t mean it was bad for you it’s just that you combined it wrong. Maybe you ate it with pasta or some complex carbohydrate containing gluten.

There are lots of principles when it comes to food combining but ultimately our bodies tell us what it likes and doesn’t like. I’ve heard David Wolfe mention that as you become mineralized at the cellular level we’re able to handle more food combinations as a result.

Dr. Richard Massey has mentioned that our lack of beneficial flora in our intestines (along with a lack of Helicobacter pylori in our stomach) significantly contributes to our inability to combine food properly.

Who knows if that’s true but interesting none the less.

In the mean time it might be helpful to adopt some basic food combining ideas. I learned many from the book Fit for Life

Is the acid alkaline balance correct?

Are you eating the bone or bone marrow along with the meat? Having your meals have a proper pH balance is key. I first learned about pH balance from Dr. Robert O. Young from pH Miracle Living.

If you’re not going to eat the bone or the marrow when consuming the flesh you might want to consider eating an alkaline green salad along with the meat. Aajonus Vonderplanitz contends that if you eat the meat raw eating a raw salad with it is actually detrimental. But if you’re eating the meat cooked, then the raw salad is very important.

Do you give thanks for it?

Personally I believe we can change the biochemical structure

of physical matter with our thoughts, intention and prayer. If you’re eating too fast, not chewing and in a stressed state this will radically make a difference.

If you eat slow, masticate the food well with your saliva and thank God for the food he has provided for you, I think this will make a big difference whether or not “meat” is good for you or not.

Do you eat the organs or only muscle meat?

Ancient people (most notably the kings and others) used to eat the organs of animals and left the muscle meat for their servants. Today we discard the organs (in our culture) and only eat the muscle. This is not natural.

The organs are considered “meat” also. When someone tells you to avoid meat are they talking about organ meats or muscle meats? There’s a big difference.

How was it cooked?

Assuming people who tell you not to eat meat are talking about cooked meat, then are they making a distinction about how it’s cooked? Is it blackened with all kinds of potentially carcinogenic material on the sides? Or is it boiled (probably the healthiest way to cook any “meat”).

How meat is cooked makes a difference.

Has it been previously frozen?

If meat has been frozen (even if you defrost it and eat it raw) it contains less vitamins, enzymes and nutrients than it would if it had never been frozen. Most meats today have been previously frozen. There are places that don’t freeze the meat. Amos Miller an Amish Farmer is one of them.

But needless to say it’s one more thing to consider right?

Is it factory farmed?

There are so many problems with factory farming that I would go into it here but just know it makes a HUGE difference whether or not that meat is going to agree with your body. Please don’t support factory farmed meat.

Who knew eating would be so damn complicated right? I mean why can’t we just eat whatever we want? I’m sure you feel like this also. Like I said before if we’re going to eat higher on the food chain we must ask ourselves more questions before we blanketly say “meat is bad and should be avoided.”

In this article I’m using meat as the example but you could ask many of these same questions about herbs, super foods and more. Personally I eat meat a few times a week and it bothers me when people make blanket statements without making finer distinctions.

Does it bother you also?